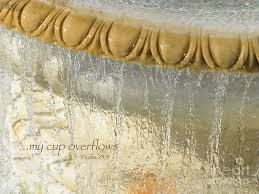 Earlier this week someone shared a declaration with me. Simply put..."The cup experience is over." At the time he ask what I heard in this declaration. My spirit quickened and my response was simple. "Overflow is what quickened in my spirit. The cup cannot contain all that the fountain is pouring out. No longer partakers of the enough in any area, but the capacity is now available for more than enough."

When I made the response I was overjoyed because that spoke to my heart. It spoke to all I have been praying for. It spoke to the prayers that I have prayed over the people in my life, the issues that I have faced and are yet to come. It spoke to every area. I'm always praying that the Lord will bless me to be a blessing to other and it spoke to that too. If I am increased in that area then others around me will receive part of that also.

If you had walked out things with me in my life (or just this week) you would say lady are you serious. You have dealt with some crazy things and you believe that you are about to receive and overflow in every area. Yes, yes I do!!! And the Lord confirmed it in the most unusual way. I recently moved in with an older lady from my church. This move was ordained by the Lord, but there are some things that I look at and say "Lord, are you serious." One of those things was an issue with the water. There seemed to be a water flow issue, but it was only in my shower. I had attempted to clean the shower head. I had attempted to change the shower head. Nothing worked. The plumber even came out and worked on some other things in the house and took a look at it while he was here, but nothing worked. However I chose not to make a big deal of it.

Each day I woke up taking my shower in what seemed like a cup full of water each day. The shower head barely putting out anything and on certain days nothing at all. I didn't murmur or complain. I just knew that one day things would be different. I had plans to start working out at the recreation center down the road, but I was hesitant because I knew I would not shower there and I did not know what type of water situation I would have here each day. I prayed and trusted that one day things would change.

Yesterday morning I woke to my regular routine of starting the shower show that it would get a good flow going and heat up properly. Once I was done I sprayed the shower down with bleach as normal and prepared to clean it. When I returned from getting dressed I turned the faucet on and something interesting happened. A force I had never seen before flowed out of the shower head with so much pressure it actually scared me. I cleaned the shower and laughed to myself saying, "That's odd and it may not happen again, but I pray that it does."

This morning I prepared for my regular routine and when I went turn the shower on the new force was there again. I left it running and prepared things as normal. The next thing I know I hear a commotion from the shower. The force had knocked the hand held shower head off it's handle, but that wasn't the only thing. The force was so strong that the drain could not keep up with letting all of the water out. The shower was about to overflow. I placed the shower head back where it belonged and turned the flow down a bit.